Anne Schadde: Homeopathy on Hold for a Paradigm Shift

What is a paradigm? Jörg Wichmann writes in his article “Beyond the Evidence Trap”: “A paradigm is a set of ideological principles and views on which a conception of the world or a science is based. Paradigms have evolved historically and are changing.”

An example of this is a paradigm that had long been valid: “The sun orbits the earth.” Copernicus, who recognized this error in the 16th century, was not heard. Galileo Galilei in the 17th century also had no chance to refute this dogma of the church despite having invented the telescope. Only much later Johannes Kepler and Isaac Newton in the early 18th century were the pioneers on the path from a geocentric to a heliocentric world view. This process of changing a way of thinking took almost 200 years.

What have we learned from this? Knowledge is not ultimate. Knowledge wants to expand, consciousness desires to grow. Inexorably! It is only through this process that science is capable of attaining remarkable insights.

Through Albert Einstein, physics began to relate matter to energy and light in the last century. E = mc² shows: Energy and Mass are just two different manifestations of the same thing.

Hans-Peter Dürr (Physicist, director of the Max Planck Institute until 1977) speaking in an interview with Anne Devillard: “What characterizes the new physics that then emerged is the transition from a material to a holistic physics.” “Electrons are not actually particles, but oscillating waves. They do not exist! Matter doesn’t really exist.” “There is no more matter, only a relation, an in- between, just an oscillating Nothingness”.“

In 1927 Werner Heisenberg also observed amazing phenomena in his experiments and discovered that in the field of quantum physics exact measurements cannot taken because observation influences the result. (“Uncertainty Principle”)

This in turn raises the question: Is the current perception of the world and the way medicine is being taught in medical schools today still consistent and in accordance with what is alive in our lives? Matter as “REALITY”? Does medication need to be a material substance?

As Mephisto says in Goethe’s Faust:

“Who wants to perceive and describe something alive,
Tries first to drive out the spirit,
Then when he has the pieces in his hand,
But the spiritual bond is missing.“

Are mind and matter not inseparably drawn to each other and mutually dependent?

If we try to prove the effectiveness of homeopathy with the research methods currently available, we can only fail, because it is the “spiritual bond” in the transition from information to matter or, vice versa, from matter to information that is effective in homeopathy. (The “in- between”?)

Since the Age of Enlightenment, and increasingly more freedom of mind more meaning has become available. Living things were and are always in motion.
As Immanuel Kant (1724-1804) phrased it:”Sapere aude! (“Have the courage to employ your own understanding.”)

Hahnemann and Homeopathy are part of this process of expanding consciousness. Hahnemann, in the Organon (Hahnemann’s written legacy) already states that illness is a “detuning of the spirit-like dynamic force”, which can only be cured with “spirit-like, dynamic remedies”. And with this insight, Hahnemann’s conclusion to dematerialize remedies and process them to act through their informative essence is simply logical.

More than 200 years ago Hahnemann began to explore the wide field of expressions of the dynamic vital force. He was a pioneer and discovered uncharted territory. The following generations are called upon to further develop this legacy.

Max Planck wrote in 1948 in Wissenschaftliche Selbstbiographie: “A new scientific truth does not tend to assert itself in such a way that its opponents are convinced and declare themselves informed, but rather by the fact that its opponents gradually die out and the emerging generation is familiar with the truth from the outset“.

This statement makes us hopeful. The young generation, who has been introduced to us homeopaths by wise mothers and fathers, often since birth, and who grew up with “globulis”, will certainly carry this experience of life into the next centuries and thus “hopefully” a new era will dawn.

We need to learn to be comfortable to live with questions that this life presents us because this allows following generations the opportunity to look ahead.

This intellectual endeavour impedes the paralysing concept that what we do not understand could not exist.

On the basis of the classical ideal, science demands complete neutrality in research. Is this perceptible in the current heated debate? Research begins with questioning. Is there anything else that we do not know but may/should know? Friedrich Hölderlin said: “Come! into the open! Friend!“

A paradigm shift is in the pipeline and homeopathy is on hold…. 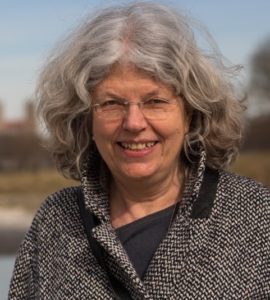 Anne Schadde began to practice homeopathy and psychotherapy in Munich/Germany in 1986. She was one of the founders of the Homeopathy Forum in Gauting/Munich and the European & International Councils for Classical Homeopathy and teaches in Germany and other countries. She has conducted homeopathic provings of Ozone, Lithium carbonicum, Cypraea eglantina (Cowrie-Shell), Lignum aquilaria agallocha (a scented wood), Gingko biloba, some of the provings are published in ‘Listening to Stone, Wood and Shell’ and ‘Seven Tourmalines of the Rainbow; A Study with case samples.‘
Visit the youtube of her webinar “The Zeitgeist in the Mirror of Homeopathy and Psychology”