Can you guess the homeopathic remedy?

Low, slow, and mystical. She woke to a blanket of white creeping over the hills, the kind of October morning where the potential is almost palpable. Fields of amber and gold against a pale purple sky—they seemed a comb for the fog, disappearing then reappearing from view. The rising sunlight glistened in small dew beads on the window. Little worlds, she thought, also of glass. She wondered what they contained.

Mara allowed herself to stare into the horizon until the tea kettle boiled. Hearing its shriek, she shook off her daydream and filled a mug with hot water. She dunked a peppermint tea bag and unwrapped a caramel to suck on while it steeped. She loved a sweet first thing in the morning. It helped the bitter taste that seemed to be ever-present.

She opened her laptop and told herself she’d get through five emails before breakfast. She’d be avoiding them, as usual, since it was rare these days when one wouldn’t set her off. Sometimes just the sheer volume of her inbox would annoy her, irritated by the number of rude customers who had nothing else to do but complain. And yet, that was her job as a remote assistant, tackling the menial tasks that the visionaries wouldn’t dare to. Unlike them, Mara was paid to exist in a world of black and white, send and reply. Anything else was folly.

She cleared her throat and could feel the constriction, ever so slightly, in her chest. Whenever the fog rolled in this time of year, her asthma would always get worse, as would her weekly headaches.

Reaching for her inhaler, the bark of the neighbor’s dog made her jump and her knee hit the desk, knocking over the pile of mail she had left balanced on its corner. Pausing to make sure the dog wasn’t in her backyard again—like the last time it had jumped her fence and given her the fright of her life—she reached down to collect the scattered envelopes. One caught her eye.

Sent from the Royal Adventure Committee, this envelope was made from a light blue, fine linen cardstock and sealed with gold wax. Mara could hardly believe her eyes, at first thinking it was a junk-mail replica before she remembered what she had done. In a flash of late-night inspiration, the only kind she allowed herself, she had applied to become a photographer for the committee’s next world tour. She immediately felt silly the next morning, waking to the reality that was her little life in her little village, and the emails she should spend her days answering instead.

Even still, something had sparked inside of her when she thought of a different future. Beyond the dewdrops of a window, beyond the water’s edge that she lived near, what if she could actually do something wonderful, heroic even, with her life?

Do people frequently get on her nerves? Yes.

Is she sensitive to more things than most? Yes.

Does she weigh down her handbag with inhalers, Beano tablets, and Tylenol before an easy trip to the market? Yes, yes, and yes.

Even still, Mara was right there. On the delicate rim of something new, unexpected, and wildly unlike any path she had let herself down before.

All she had to do was open an envelope. 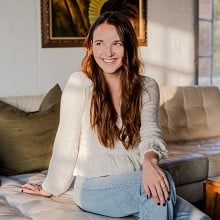 Nicole Ziza Bauer is currently a second year student at HSI and has spent the last ten years working as a writer and editor with a focus on food, travel, sustainability, and contemplation. She’s currently based in Austin, TX with her husband and one-year-old son. She shares more of her work on nicolezizabauer.com.