Homeopathy is a wonderful medicine for a wide range of problems, not just for our family but for our animals as well. We enjoy living on a small farm and raise various livestock and pets. Raising animals from birth to grave (or table) can be very rewarding but also heartbreaking. When you live in a rural area you have to be prepared to deal with sudden midnight births, infections, predators, and freak accidents on your own.

This is one of my favorite stories to share with people about our experiences with animals and with homeopathy.

One day our dog began barking on alert and all the animals in the back pasture were alarmed. We had a fox in the area and it apparently came after our chickens. After the dust (and feathers) settled, we found a year-old laying hen lying lame and trembling. Her name was Pea.

She had a compound fracture of her left shank midway between her hock (the main knee-like joint) and spur. The bone was protruding posteriorly from the scales, a clean sharp break with some bleeding. The reflexes in her toes were responsive and the toes remained warm with a pulse, indicating the primary nerves and main blood vessels remained intact. We had two decisions: try to mend the bone or have a chicken dinner. She was my two daughters’ favorite chicken and they pleaded with me to give it a try. My nine-year-old daughter, Maggie, had recently broke her wrist and so knew what to do: “We will make her a cast and give her medicine just like I did – she’ll be fine!” So we gave Pea nearly the same homeopathic course which Maggie received for her broken wrist not long ago.

We gave Pea Aconite 30C for shock, and this helped keep her calm while we worked on her. It is important to reduce the effects of shock after a trauma in order to initiate healing. As long as a body remains in shock or terror, the organism focuses all its energy on maintaining vital functions rather than, in this case, fighting infection and healing a major wound which requires a lot of energy. Most animals handle shock and terror much better than humans, quickly shaking off the effects and going on their way. Aconite helps to calm shocked nerves, especially when one is trembling like Pea was.

My eleven-year-old daughter Jane, held Pea steady while Maggie and I cleaned the wound, applied an antiseptic salve, removed some loose scales, and completed a full body examination. All Pea’s other joints and her wings were in working order. Her vitals seemed intact and she seemed fine, except for her broken shank. The flesh next to the wound was getting swollen and blue, so we gave her Ledum 30C to reduce swelling and help prevent local infection. Ledum is used for sprains, contusions, and puncture wounds especially when there is blueness and swelling. The bleeding stopped. We set the bone as best we could and devised a splint from a wooden clothespin, sterile gauze, and a generous amount of duct tape.

The first day was uneventful. No more swelling or bleeding. Pea remained calm and began to take food and water.

Pea spent the next few weeks in quarantine safely away from her flock who would have pecked at her leg and taken advantage of her weakness. She was kept in a small cage so she would not be able to put much pressure on the injured leg or try to fly and land on the leg and break it again. We prescribed Symphytum 30C daily in water for a week. Symphytum helps on multiple levels for broken bones. It reduces pain, prevents infection, and helps to mend separated bones, promoting the formation of a healing callus and enhance bone regeneration. The callus is a formation of soft tissue around the fracture site and provides the site with new blood vessels and protection. She took Symph twice the first day, and once a day thereafter. Pellets were dissolved in water, succussed, and administered orally with a syringe, a few drops at a time into her beak.

Pea took the liquid medicine easily. Maggie and Jane dutifully kept her small cage clean and made sure she had fresh food and water daily and got her medications. Pea also received cell salts: Calc fluor and Calc phos twice a day in water just like the Symph. The cell salts are nutritive and provide an easily absorbed form of calcium for bone regeneration. We gave Pea one dose of Silica 30C, which assists absorption of the cell salts and enhances proper bone regeneration, as opposed to growing erratically into a crooked or malformed leg.

Week 1: Pea started standing on her splint and moving just a few steps. She wasn’t allowed to run around outdoors, so she was carried around the barn yard to get fresh air and sunshine, eat fresh grass, and scratch at the ground a little. She laid eggs less often, about once a week instead of daily, and without fully formed shells. For many reasons, it’s important for animals to maintain contact with the bare ground, especially foragers and grazers like chickens.

Week 2: Pea was able to walk a little more, but still not much. The flesh wound was completely healed. Symphytum was reduced to once a week. The cell salts were not administered orally but just added to her water supply for sake of ease. She was becoming livelier. We brought fresh cut grass and clover to her cage because she could not forage on her own.

Week 4: Pea showed more desire to be a normal chicken. A nice callus formed around the fracture sight. The wound remained clean and without excessive swelling. The splint was reduced to a lighter outfit. She was getting weak from lack of exercise, so she was allowed to get out and run around more and more each day. The cell salts and weekly Symph are stopped. She was laying eggs about every other day, but with thin shells. She received one more dose of Silica 30C. This is to promote proper bone growth and help restore strength.

Week 8: Pea flies! She runs and flaps her wings again. She has a notable limp, favoring the left leg. She is returned to the flock and allowed to roost again on the perch, being strong enough to make the landing and fend for herself while free ranging. She is soon a normal hen, laying an egg a day once again. Her slight limp remained but didn’t slow her down or make her vulnerable to predators. She was just like the rest of the flock, except much more docile, running to my daughters, seemingly begging for food and enjoying being held.

In veterinary care, Silica is a major remedy for rehabilitating weak grazing animals like ungulates and hoofed animals. Silicon is naturally found in the woody stalks of grasses and other leafy plants. The stalks aren’t very nutritive themselves, but the silicon in the stalks aide in the absorption of nutrients from the rest of their diet. For chickens, eating calcium carbonate supplements (oyster shells) is not enough to promote healthy bones and strong egg shells – silicon is necessary for the absorption and assimilation of calcium, and this is primarily found in grasses.

Silica has wonderful precedent to help correct tooth and bone malformations, and was once used on our farm to help a malnourished young goat who, from her depletion, lost her horns. It was a long hard winter and the older, bigger goats apparently bullied her and prevented her from being able to get her portion of food. Her horns fell right off as her body sequestered nutrients from them. Silica and proper nutrition quickly helped restore her strength and weight. Often when this happens a goat will, if lucky, regenerate only a bud or small malformed horn, but her horns grew back relatively quickly in proper form and normal size. She is now a mother herself and one of our hardiest goats.

Remedies used and their indications:

Aconite: for shock, terror with trembling

Symphytum: for pain from broken bones, union of fracture, formation of callus

Cost: People often ask how much a medicine, which is so effective, costs. The total cost of all of Pea’s homeopathic meds for this injury was about $2 given that I already had a homeopathy kit. If I had purchased all the homeopathy medications individually just for the occasion it would have totaled about $45.

Potency: we used 30C, which was what was available from a homeopathy home kit at the time. This is a utilitarian potency for a wide range of situations. Usually, I use 6C or 9C for animals because most animals are very sensitive and respond quickly to homeopathy. This is the potency recommended by most homeopathic veterinarians, but in acute situations, you use what you have. Cell salts are in 6X which is an easily absorbed form of minerals, but also dynamic in their effects.

Veterinary guides: There are several good DIY veterinary homeopathy books for home/farm use on the market. The one I use most is Repertory of Veterinary Homeopathy by John Hoare. In order to treat your own animals, it is important to be intimately familiar with the species, their basic anatomy and physiology, their diet, and the individual animal’s typical behavior and character. For example, my west highland terrier, Huckleberry, is normally bubbly, in your face with affection, has an insatiable appetite, and believes everybody is his best friend (you might guess his constitutional remedy). A little knowledge can go a long way in being prepared for the worse.  Because most animals share a lot of similar anatomy, physiology, and behavioral traits with humans, treating acute problems like a broken bone can mimic human treatments. Of course, none of this ever substitutes for the advice and skill of a good veterinarian.

To learn more about Jason Benton and his clinic, visit www.integrativecarepractitioners.com 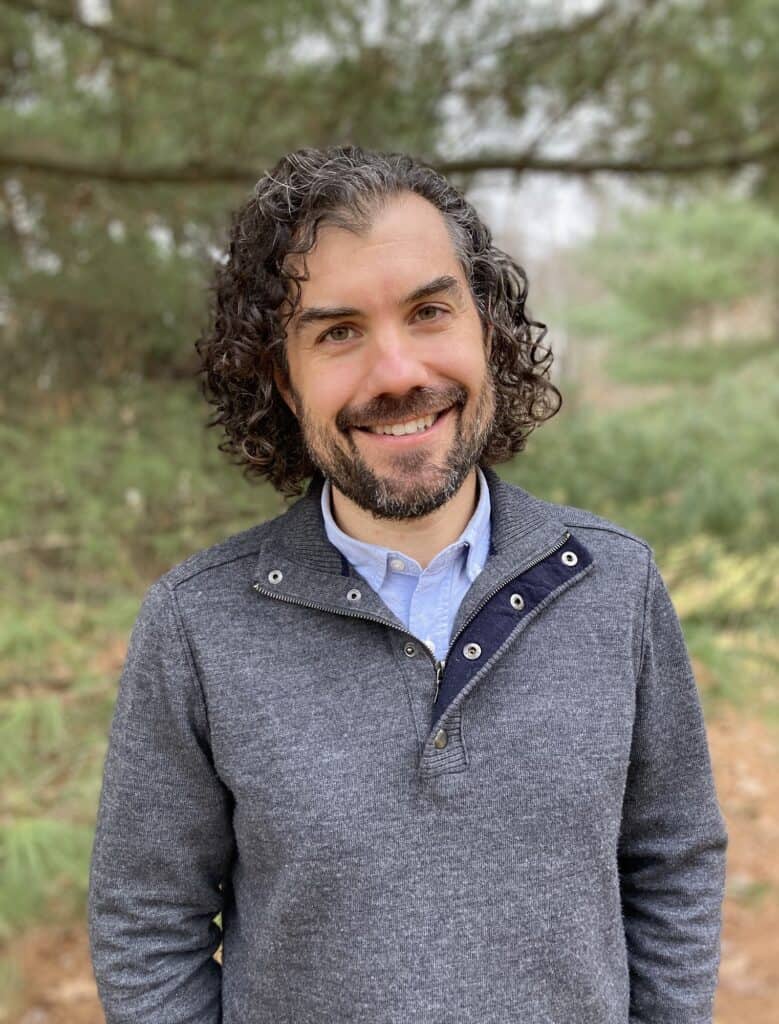 Jason is a homeopath student completing the advanced practice course at HSI in preparation for the CHC certification. Jason completed the practitioner course at HSI (CHom) in 2019. He is a psychiatric nurse practitioner and certified CranioSacral therapist (CST-T) and integrates Homeopathy, CranioSacral therapy, and Psychotherapy for a wide range of problems. Jason and his spouse, Jessica, operate a holistic mental health clinic in Portersville, PA: www.integrativecarepractitioners.com