My 9-year-old boy started feeling nauseous shortly before his bedtime. The nausea was soon followed by vomiting. That day for dinner he ate food which was prepared 2 days prior. Since he was the only one in the family that ate this food and the only one who was sick, we suspected that his symptoms might have been a sign of food poisoning. Thus, he was given a dose of Arsenicum album 30C, a homeopathic remedy often helpful with food poisoning. He fell asleep and slept through the night. However, he woke up around 5 AM and vomited several times during the next two hours. Repetitions of the remedy did not bring any relief. It turned out that more children in his class were sick and it was assumed that there was a “stomach bug” at school. Food poisoning from the cafeteria was ruled out as my son takes his own lunch to school.

The entire day he refused to eat and spent the whole day in bed. In the evening he vomited 2 or 3 times, better during the night, but the vomiting resumed the following morning. After waking up, he vomited 4 times during a period of 2 hours, not feeling better afterwards. At that point he had a low-grade fever (100.1 F). He perspired on his head and felt warm, but preferred to stay covered. He was sad, tearful and didn’t want to talk. He wasn’t asking for a drink, but drank water when it was offered to him. His lips were dry and he had white, thick coating on his tongue. He didn’t want to get up, had a headache in the forehead and felt better lying down.

To find a remedy, according to the homeopathic principle “like cures like”, his symptoms were then entered into the homeopathic Repertory. This is an index available as book or software which lists particular symptoms in rubrics. The rubrics link to homeopathic remedies known to have helped with condition. The Synthesis Repertory by Dr. F. Schroyens, used by professional homeopaths, lists his symptoms as follows:

The remedy matching all of the child’s symptoms was Antimonium crudum. This is a remedy indicated when there is indigestion with thickly coated white tongue. The thick, white coating on tongue like fur or “like snow” is a symptom characteristic especially for Antimonium crudum. The remedy also lists the symptoms of headache, loss of appetite and is better lying down.

My son took Antimonium crudum 30C around 8 am, then fell asleep for about 2 hours. When he woke up, he said that he didn’t feel sick anymore. He said “I don’t have the problem in my tummy anymore that was there when I was sick”. He got up to play and didn’t need anything else.

Antimonium crudum (Ant-c.) is made from native Sulphide of Antimony. Children that may need this remedy can be very picky about what they eat, very thin and sickly looking. The remedy has a strong affinity for the stomach and digestive tract and is often used for digestive complaints like nausea or indigestion after overeating (like during the holidays). The stomach complaints of Ant-c are often accompanied by headache and loss of appetite. Someone who needs this remedy could crave cucumbers and also vinegar or pickles. At the same time, Ant-c is one of the remedies that lists a strong aggravation by sour foods. The most striking symptom indicating this remedy is thick, white coating on the tongue like fur or “like snow”. The symptoms of Ant-c often start in the evening, are worse by heat and the person feels better lying down and or by walking in the open air. 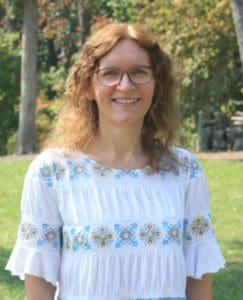 Anna is currently a student at Homeopathy School International. She has a PhD in Chemical Engineering and worked for 10 years as a Research Engineer. She became intrigued by homeopathy after one of her family members experienced a remarkable health improvement as a result of homeopathic treatment. Anna loves reading books and playing piano as well as spending time with her husband and 2 children.