Dusty – A Happy Dog Suffering from Fear and Pain

Behavioral clues in a client who cannot speak, like a pet, can reveal a lot, especially about fear and pain. Remember what is most important in a case, especially when your client cannot talk.

Dusty is a 1 year old male dog who I know very well. He lives with a loving family of four adults and another dog named Scrappy. I came to visit and was surprised he and Scrappy didn’t run to greet me as they often did.

Upon entering the home, I observed Dusty lying down only for brief moments and moving from one spot to another. It seemed he could not get comfortable. When I got down to his level to interact, he wouldn’t make eye contact or even lift his head. What used to be a loving and playful pet now had no life in his eyes. He kept his tail and head down when moving. Previously, he asked to be picked up for cuddles but now whimpered and struggled to get down. This was not the same dog. I observed Scrappy bring Dusty toys and again, Dusty would not even lift his head. Scrappy laid by his side.

Something happened, but no one knows what

“Something” happened a few days ago but no one knows what and he hasn’t been well since. The family took him to the vet and were informed no broken bones or any evidence of being hit by a car. The vet thought he was grieving but that there was nothing he could do for grief.

As I continued speaking with the family, we discovered that there was a corresponding event. “Dusty started grieving suddenly” on the same day the family’s mother was admitted to the hospital. He had no energy, was not playing, laying in the mom’s chair and on her pajamas and laid in the front yard like he was waiting for her. He only took treats slowly. Once the mother returned home he was no better. In fact, the daughter said when she was out front with him Dusty started shaking and ran to her when a certain neighbor was outside. The family wondered if someone abused him, if he could have been hit by a car, or any other traumatic event.

As we talked about Dusty’s timeline of events and symptoms along with my observations of his behavior, it became clearer something scared him. He was still afraid and also probably in physical pain. I looked at the remedies Rhus tox, Hypericum and Arnica. Although he was in pain and couldn’t find the right position, Rhus Tox was not quite the right fit. I read about Hypericum wondering if he had spinal involvement and/or nerve pain. I took a closer look at Arnica regarding possible physical trauma, bruising, soreness, the possibility that he had been kicked but I just wasn’t clear on which remedy to recommend. It’s difficult to choose a homeopathic remedy when your client can’t tell you about the symptoms.

Focus on the fear first, then the pain

I then reached out to my supervisor at the school who responded quickly and helped me to focus on his fear first. I gave Aconite 30C and the family reported that night that he started smiling, wagging his tail, wanting to be picked up for cuddles and even started to play again! They said he was becoming more himself. I was excited to share the good news with my supervisor and she continued with her assistance. To make sure that any possible bruising Dusty may have would also improve I gave Arnica 30C the next day. After that Dusty actually started running through the house while playing with Scrappy! I repeated Arnica 30C one more time. Dusty had a speedy and full recovery, as if nothing ever happened. “Like nothing ever happened” is a fantastic result after a “never well since”!

Behavior of fear and pain pointed the way

We didn’t need to have the information of what exactly happened to Dusty, his behavior displaying fear and pain pointed to the right remedies.
The family felt like they “got their dog back”. They had never heard of homeopathy and the daughter declared to be a believer once she saw how he got better after the remedies. She even started telling others how homeopathy worked wonders for and cured their beloved pet. 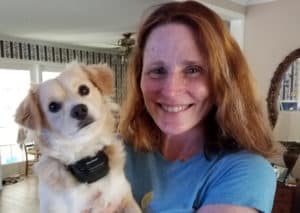 Tracey Duncan is a second year student at Homeopathy School International. She was a practicing Registered Respiratory Therapist for 23 years. She received her Bachelor of Science in Nursing degree and has been practicing as a Registered Nurse for the past 5 years. Her favorite hobby is hiking with her boyfriend and their dogs and also helping dogs and any animal in need, often with the support of local rescue groups.