Bertram’s Smash-up into a Doorframe 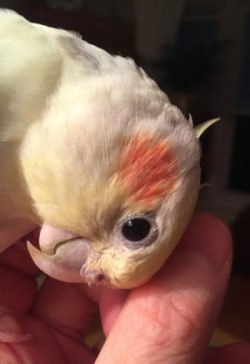 Bertram is an 18 month old male Cockatiel bird. One late morning or early afternoon, he was startled by something outside, which caused him to take urgent flight, accidentally steering himself right into a door frame. I heard the clunk and thought this was surely an injury. To my surprise I found him still flying around, as if nothing had happened and he was still playing. Birds do tend to hide their illnesses instinctively, to protect themselves from predators, so knowing that I waited until he landed to rest. I could see he was bleeding, but not profusely, and his beak had shards sticking out of it, as if he had cut open the beak.

Beaks are highly vascular mostly towards their proximal end and are made out of jawbone with a layer of keratin, which is like what’s in antlers or fingernails, so when injured can take time to completely heal, like an injured fingernail needing to grow out. Consequently, I felt very pained by this fact. Since I heard it happen, as a serious blow, and since he didn’t connect with the injury right away, (“fixed idea that he is quite well & injury with extravasation of blood,” Morrison) I administered Arnica 200C in water.

I diluted a few pellets of remedy in one of his water bowls. Since this species of bird drinks rarely all day, I wasn’t concerned with over medicating him and instead, hoped the scant times he would drink, would support his healing process. To administer the remedy the first time, however, I used a Q-tip soaked with remedy and dripped it first, right on the injury, in which I noticed his face change immediately, as if to say, “Whoa what is that?!” Following, almost simultaneously, was an easeful expression. Then, immediately after, I let him bite the end of the Q-tip, in order to get the remedy on his tongue, appeasing my sense of thoroughness of treating his whole system in and out.

I watched him carefully and within 15 minutes, he started to groom himself by rubbing the beak into his hind feathers, where there are oils and cleansers birds use to groom themselves. By doing this, he was also smoothing away the chards of broken beak. He slept a lot the rest of the day. By night fall, he seemed like he was in pain again, as he was becoming very quiet and settling in early for the night. So, I gave another dose of Arnica 200C from the same water bowl. This time, just letting him bite the end of a soaked Q-tip.

By morning, he woke up cheerful with a smaller lesion, which had localized into a tiny round red circle on the right side of the top of his beak (size of a head of a pin) that looked like a simple bruise, but the beak was smooth and he was chipper. After breakfast, I administered one more dose of the 200C via Q- tip again, from the same water bowl, as the first dose the day before (dripping it on the beak and letting him bite the Q-tip). Birds, like any animal, don’t really like taking things like medicine. I had to be quick with dripping it and of course he wanted to bite it, as a natural reaction, which was great from my point of view and part of the scheme for getting him to take the remedy inside his mouth.

Within 15-20 minutes, he flew into where I was working with no mark left on his beak, as if to say, “I am all better now mommy!” The bruise resolved fully and he didn’t look like anything had happened to him, which was very surprising that even the little red bruise was completely gone! The whole ordeal was resolved in less than 24 hours.

The chosen remedy, Arnica Montana, according to Dr. S.R. Phatak, “is a traumatic remedy par excellence!” (Emphasis added) Its sphere of influence in this arena of injuries covers things like, pain, bruising, concussion, bleeding, shock or events causing jarring, so useful for surgery, dental exactions, delivery, sprains and pain from over exertion. It also has an interesting affinity for improving the reabsorption of blood following nose surgery, according to Dr. Roger Morrison. One interesting mental characteristic, unique to Arnica, is the injured person will say nothing is ailing them.

The following is a short list of Bertram’s symptoms used to choose this wonderful remedy: